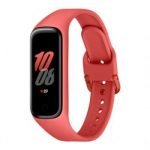 The finish of the smartband is the polycarbonate finish. The smartband has been launched in various color variants, Black, Blue, Pink. The smartband comes with an IP67 waterproofing rating.

You can see the current Samsung Galaxy Fit2 in India in the price tab & see the prices tab.

Battery, the one part that everyone wants the most in their device, be it a tech gadget. Not users even we also go to buy smartband online or offline, then the important question is how much is the battery backup because today’s new people want their gadgets to last for a long time on one charge, they do not want to have to do frequent charging. Improving look at the battery section of this Samsung Galaxy Fit2. The capacity of the Samsung Galaxy Fit2 is 150 mAh, which provides up to 15 days of battery life which is quite good.

This Samsung Galaxy Fit2 supports the sensors like an accelerometer.

With this Samsung Galaxy Fit2, the user can easily respond to the notifications without opening the smartphone.

You can see the Samsung Galaxy Fit2 in India in the “See All Prices” tab.